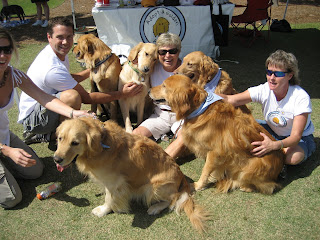 Well, here we all are at Star 94's Petapalooza last weekend. What a neat opportunity for AGA!
We looked great with our fabulous new tent, raised good money in merchandise sales and donations, and had many, many visitors wanting more information. At times, there were people 2 and 3 rows deep at our tent. Lots of petting going on!
There were probably 50 booths there -- food, rescues, pet related vendors and others. Several thousand people and their dogs attended throughout the day. We had a phenomenal location, right in the center fairway and were easy to spot with our tent. We had adoptees visit and actually, it seemed like anyone with a golden stopped by also. We met lots of cousins!
A special thanks to Sharon Nicolson and all the volunteers who helped. We were, well, dog-tired by the end of the day.
Posted by Melissa at 1:39 PM No comments:

We love our new baby! 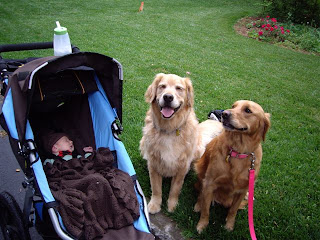 Dear Friends at Adopt a Golden-
We just wanted to share our exciting news that our little brother, John Harrison Riley "Harrison", was born last Friday April 25th! He was a big boy at 9 pounds 4 ounces and 22" long, which is all the better so he will be ready to play with us soon! We couldn't resist sharing a picture of us taking our brother for a walk and then a much needed nap afterwards...we try to be as close to him as possible at all times, Beau even tried to sleep with him in his little bed! As expected, we are the perfect Golden big brother and sister, very gentle and protective of our new little one. Look forward to introducing him to everyone at an adoption day soon! Love, Beau and Sadie Riley 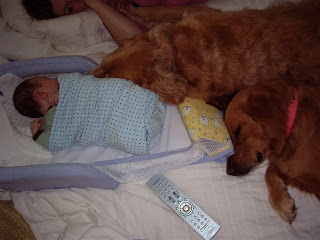 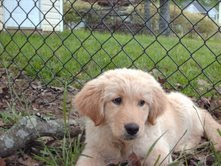 Hi y'all! My name is Romy and I'm an 8-10 week old girl golden puppy. I was born in Rome, GA and the family there asked the animal control folks to come get me. No reason. Obviously they saw how cute I was and wanted to be sure that AGA got me!!!! I'm a total sweetie and can't wait to meet my new family! They say I just have to get a vet check-up and then I can start meeting people. Yippee!!! 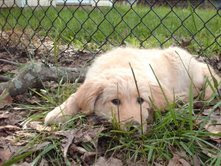 Posted by Melissa at 4:41 PM No comments: 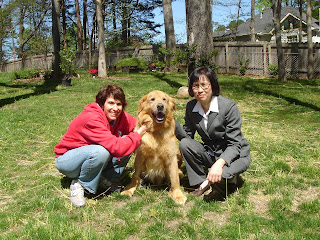 I was a "stray" picked up by Cobb County Animal Control on March 4 near Pope High School. The County was pretty sure they knew who my grandmom was and called her, but she doesn' speak English so well and didn't understand. So, off I went to the shelter and then to an AGA foster home where they started calling me "Dempsey." Whatever.
Cobb County gave AGA my grandmother's name and telephone number and they tried to reach her but she did not return the call. A few weeks later AGA received an email from a young girl named Sally who said her dog, Toby (ME!!!!), had been missing from her mother's home since March 4. She described me to a tee. AGA realized that their orphan Dempsey was really Sally's Toby (ME!!!!). My mom is living in Seattle and that's why I've been staying with her mom.
AGA found out that my mom Sally had been looking everywhere for me - putting ads on Craigslist and had called all the shelters. The shelters told her that Goldens get turned over to AGA and that is how I was found. Lemme tell you, when AGA picked me up from my foster mom's house and drove me home, it was one of the happiest days of my life! My grandmom started to cry she was so happy.
AGA thinks that one of the best parts of this story is finding out that I'm 14 1/2 years old. They thought I was much younger (ahem, thank you). And they loved finding out that I had been on a strict diet of Tofu, soy sauce and brown rice my entire life! It was good to get back to my usual food, but I didn't really mind those Milkbone treats and rawhides too much.
That's my story. AGA is the best. Who knows what would have happened to me if they weren't there? THANK YOU.
Posted by Melissa at 4:43 PM No comments: