Dudley GP and Monkey the Kitty 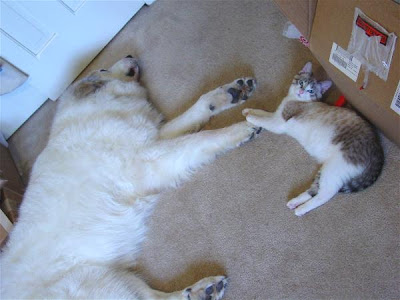 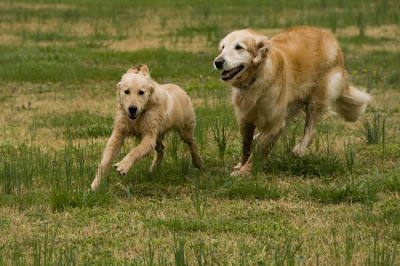 I don't know what an acre is, but I have 25 of them to run on with my new big brother Shadow. Thanks, AGA! This life is much better than being in that crate 8 hours a day!

Posted by Melissa at 3:14 PM No comments:

Jake and Patches With Their New Sis Anna 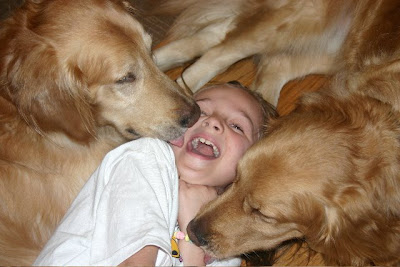 Hey - you missed a spot!

I know they call me "Silly Sally" but I didn't put this hat on myself!

Posted by Melissa at 9:13 PM No comments:

A Letter from Maya 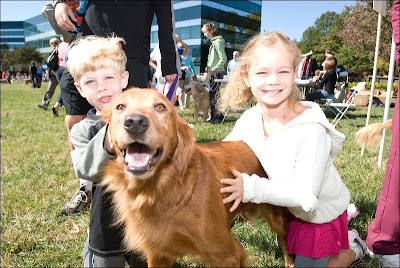 Greetings wonderful Adopt-A-Golden Angels,
I'm Maya (formerly known as Shortcake) and I wanted to check in and let you know how much fun I'm having in my forever home. I've been kind of busy traveling, but just wanted to say HI! I spent the first 4 years of my life in a puppy mill in Missouri. I never thought life could be so good, now that Adopt A Golden found me. I met my wonderful foster mom Delynn, and my foster sister Savanna. I loved sleeping with mom and sis and they took such great care of me and got me all ready to meet my new family.
So, listen to this...I now have a kitty cat sister named Jasmine. A real-life human sister who is 8 and is so gentle with me, and a little boy who is 5 who is so full of energy I'm not sure when he's ever tired. Oh, and of course my mom and dad. I sleep in a bed beside my mom and dad. And, I'm the gentlest dog ever. Everyone I meet always tells me how sweet and calm I am. I'm defiinitely a momma's girl because I spend every day with her while she works at home. I love going to put the kids on the school bus in the morning. And, you've probably heard this through the Golden Vine already...but, I am THE BEST dog walker ever! I LOVE LOVE LOVE going for walks, and runs. I run kinda like a horse...very efficient. And, I'm such a good walker that even my human sister and brother can take me for walks. I am so happy to be in a home filled with love. I never will get tired of being hugged and told how pretty I am.
And, I am pretty! My coat is so soft and nice thanks to the salmon and sweet potato diet I'm eating. Since I've been in my forever home I've traveled around to some exciting places. First, I went to this gigantic party...like Woodstock for dogs..it's called Golden-Rama. I had my picture taken with Santa and that was fun. I saw so many dogs that looked like me; it's was one big ole family reunion. I watched these dogs play musical chairs and sit on command. That's going to be me next year after I get a lot of training to build my confidence. Then, my second field trip was to Seaside Florida for Thanksgiving. We stayed in my Mimi's condo overlooking the ocean. I loved the beach and laying in the sun and sand. I'm not so sure about that ocean-thingy though. I don't like the water yet but I'm sure my mom will sign me up for swimming lessons so that I can learn to like the water.
My best trip of all so far was to visit my Mimi in Louisville, Kentucky. My Mimi has a big dog named Harley and I loved hanging out with her. We went outside together without our leashes off, and we always come back. Why would I ever run away from this great home? Then, we went over to my uncle's house and he has the cutest little Golden Retriever puppy. It was a blast to play with the puppy and run around. I was in doggie heaven. After all of my training, my mom and dad still may get me another Golden for a playmate. When I'm around other dogs my tail can't stop wagging and I just love, love, love being around other dogs. Meanwhile, we have lots of doggy playdates. But, I'll keep you posted on any new pup's added to the household.
Well, I guess I should go feed my WebKinz and get to bed. Thank YOU Adopt A Golden from the bottom of my heart for showing me that there is another life outside of the puppy mill. My life is so wonderful now, and it's all because of YOU!
Posted by Melissa at 8:33 PM No comments: 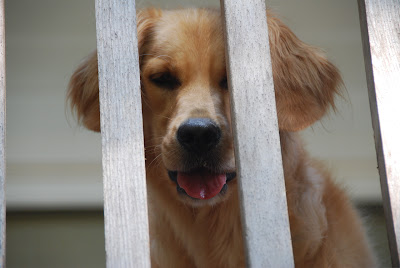 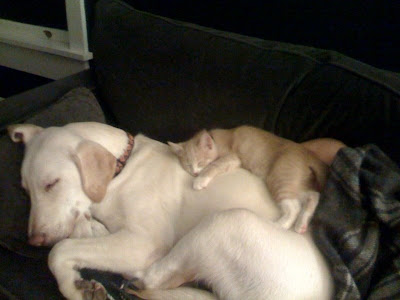 Posted by Melissa at 8:27 PM No comments: 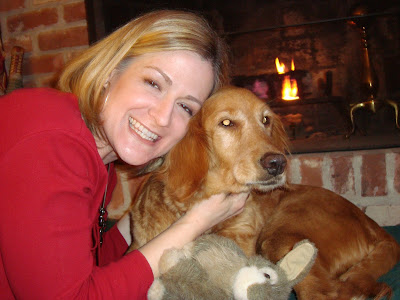 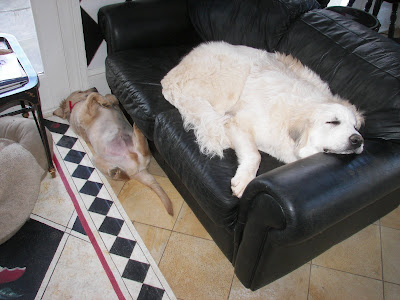 Hey, when I get older, do you think I could get a spot on the sofa too? 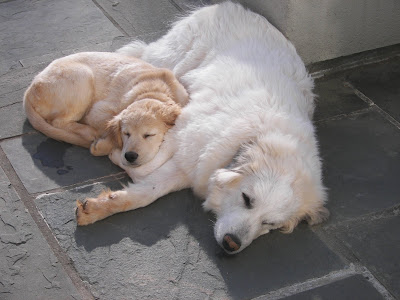 Well, it's nice on the floor too - when you have company.
Posted by Melissa at 8:45 PM No comments: 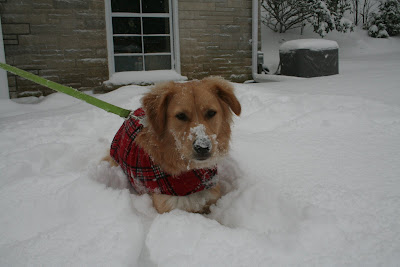 THIS is snow, you silly southerners!

Posted by Melissa at 5:48 PM No comments: 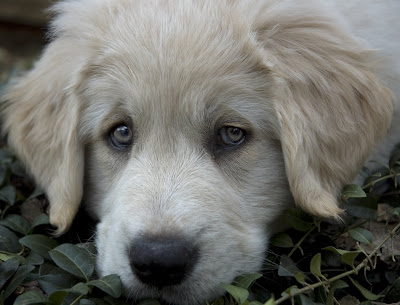 Hello, my AGA friends! Life is good - there are SO many things to investigate in this world. My dad says I love being in the middle of anything and everything. I say, yeah, so? Isn't that what puppies do? Granted, I'm a 54-pound, 5 month old puppy, so maybe that makes my presence a little more, well, apparent? Dad especially likes when I help him in the yard. He got me the greatest toy - if blows all the leaves around and I get to chase them! Hey - I think I hear him starting it up - gotta go!
Posted by Melissa at 11:45 AM No comments: