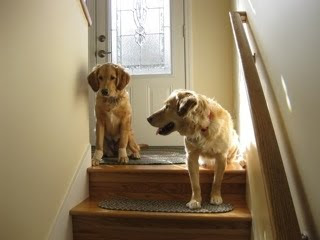 Just put one paw in front of the other, Daisy. It's easy!

Jasper Thanks AGA Volunteer of the Year 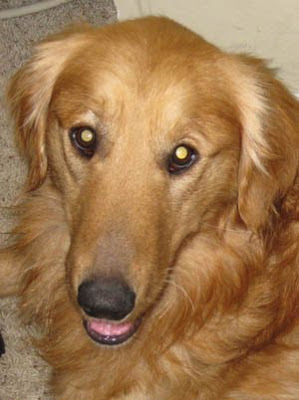 At our super successful Golden Gala last weekend, Carolyn Waters was announced "AGA Volunteer of the Year." On behalf of all the orphans and adoptees, we thank you!! Here's what Lauren said. The rest of us just wagged our tails. Really hard.
"I want to take a minute to recognize a special volunteer who has worked tirelessly for us. This is a woman who is the first to go look for a lost dog, she will drop everything to get a dog out of a shelter and safely to a vet. She will take a dog to a foster who is unable to pick up their foster dog before a vet closes just so that dog can get into a home one day earlier. And, if a dog is waiting for a foster home to open up and is in boarding, she is one of the first to go visit the dog, give it a walk, bring it a toy and then spend another hour brushing the dog. She also opens her home to foster our dogs and has adopted 3 over the years. When we have a transport coming from a puppy mill in Missouri that arrives at 4 am in an empty Walmart parking lot, she is the one who is there and is the one who talked everyone else into showing up. She is the one that deserves the first ever AGA Volunteer of the Year Award… She is Carolyn Waters. Please join me in thanking her."
Congrats, Carolyn! Woof woof!
Posted by Melissa at 11:11 AM No comments:

Tissue Alert: Loving Mom Tells Us About Her Abby 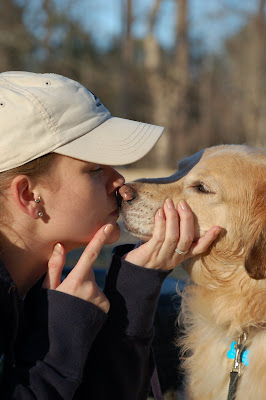 I am just now writing you because it has taken me a few weeks to pull myself together.
I would like to share some of Abby's life with you. Also, I found this place online, and created a little website with pictures for her. If you'd like, you can light a candle for her too! I'm sure she would have loved that. :)

I brought Abby (formerly Abbey Road) home on April 1, 2007. I had just moved here from out of state the previous fall, so I didn't really know anyone. I was at a dog park one day, and there was a lady carrying an AGA bag, so I asked her if she was with the organization. She told me no, but that she got her Golden there, and that's where it all started. Funny, I was going to the dog park, dog-less, just to be around the dogs. :)

When I got Abby, AGA thought she was about 7, and my vet said about 8. So, I decided we'd say she was 7 and a half. 6 months from the day I got her was her made up birthday. So this past October (09) she "turned 10"!!! Abby wasn't like most Goldens that loved to chase a ball or play with toys. I used to make a joke that she wouldn't even chase a tennis ball if you wrapped it in bacon! She did have a toy with little holes in it and would push it around with her nose until the kibble came tumbling out! That was the only "toy" she ever played with.
When I brought her home, she had her AGA bunny and I had gotten her a few other things as well. I ended up giving most of her toys away, because she had no use for them. Every once in a while, if she particularly needed or wanted to get my attention, she might pick up a stuffed toy and toss it in the air. As soon as I looked at her, she had this look on her face like "where'd THAT thing come from?" I'd try to play with her, but she just wasn't having it!

I soon learned what she did like. Ear rubs, slow walks, sniffing the air, chew bones and treats among many other things. She had the biggest heart I have ever seen in a dog. She loved with a hard and steadfast love.

Every morning when I got up, I would get on the floor with her for a few minutes and we would have "floor time". I tried putting her on my bed at night, but quickly learned that she would rather sleep on the floor. I was a little taken back at first, but quickly reminded myself that rescuing a "senior" was about her comfort, not mine. I got her a big fluffy bed for the bedroom, and made a special one for her for the living room. Two years later, she hardly slept on any, silly girl. She did however like the couch, which I didn't completely understand.

Abby liked to go with me to the park and walk around to sniff out adventures! She liked going to the lake and swimming and digging and panting! She liked sleeping on my foot until it was numb. I miss all these things. She would follow me from room to room, where she would finally get tired of chasing me around the house and just settled for one spot on the floor.

In the last 6 months or so, Abby's hearing had started to show significant signs of fading. I would come home every day at lunch so we could have some girl time, and she wouldn't even hear me come in the door! But once those eyes opened, she was right there by my side.

Abby was always a panter, and a heavy one at that. I recently discovered that it was the mass on her brain that made her think she was always hot, and that's why she panted all the time.

In early December, I noticed Abby was urinating in the house. The urine had a bad odor. I took her to the vet and my suspicion of a UTI was confirmed. Her behavior quickly started to change....she was anxious, confused, had her days and nights mixed up and started to become very aggressive. I had her on antibiotics for almost 4 weeks with little to no improvement.
When we went for her checkup on Thursday, January 28, I found out that she had a brain stem lesion. The lesion had moved upward and created a mass on her brain. Her body had been compensating for the behavior that the mass has created by applying pressure to a certain portion of the upper cerebral cortex. The doctor told me that even if we tried to treat it, that it would only buy her a few months. She was not a happy girl and declining very quickly.

After what seemed to be hours of conversation and crying, I decided to give her back to the one that gave her to me. It was the hardest decision I’ve ever had to make. I miss her so much that it hurts.

I am getting married on May 1, Abby was going to be my ring bearer. After I get back from my honeymoon, we would like to welcome a puppy into our new family.

I will never ever forget all of the fabulous times Abby and I had together. She was my rock when I was alone. I shared with her all of my secrets and my dreams. She was my comfort and my sweet little girl. She will be in my heart forever.

I cannot thank you enough for taking the time to read this. Thank you for letting me write this, and for listening. I’ve gone several days now without crying. I look forward to having a new baby to love on.
Posted by Melissa at 10:11 AM 7 comments:

Danny Boy At His New Home 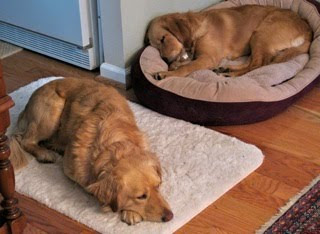 My very own bed! I'm soooooo happy - thank you AGA!

Max at the Tennis Court 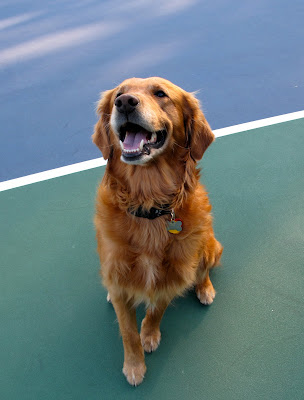 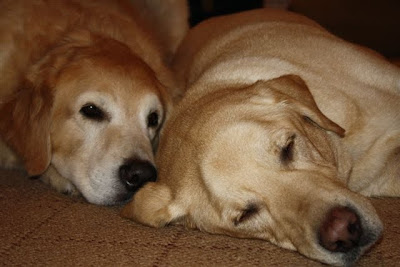 So that's why they call it "dog-tired."

Posted by Melissa at 9:32 AM No comments:

Hello from Gracie (AGA Angel) From Her Brand New Home 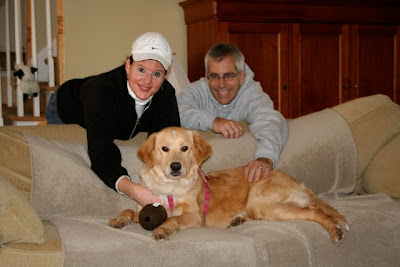 Sometimes I let them sit on the couch too.

Posted by Melissa at 9:48 AM No comments:

Bella (AGA Valentine) and her Cousins 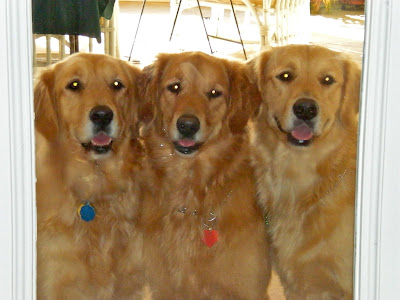 Who says three's a crowd?

Posted by Melissa at 8:00 AM No comments:

Jack Spends Time As A SuperModel 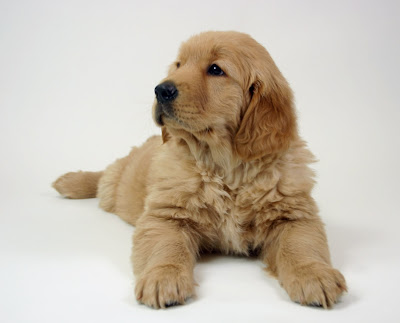 Shelby Is Queen of the Snow 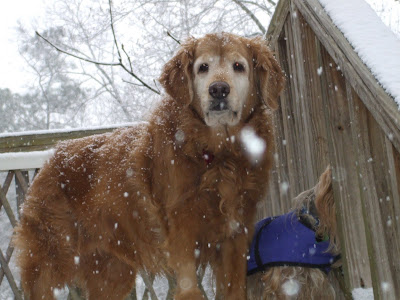 This is the prettiest snow I've seen in 10 years! 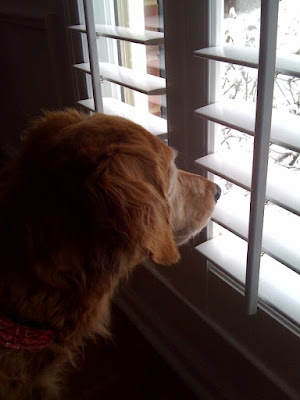 Why is everything all white????

* Be like Sadie's mom and send us your favorite photo of your golden in the snow! We'll post on the blog or our Facebook page. Send to info@adoptagoldenatlanta.com *

Posted by Melissa at 9:53 AM No comments: 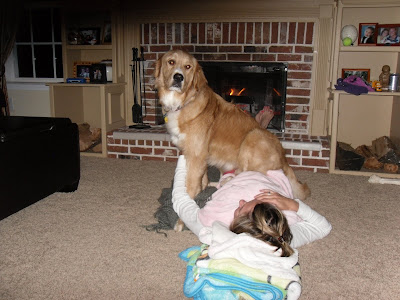 I've found this technique quite useful for keeping track of my people.

Reece and Flounder Send a Picture 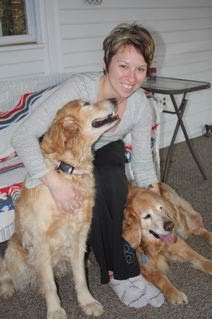 Sunny Gets a New Friend 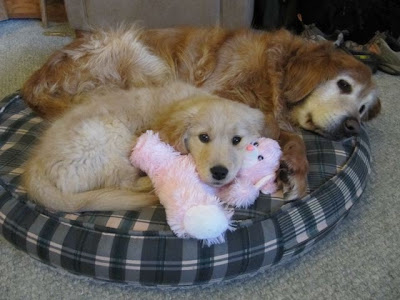 I'm thinking she's gonna need her own bed in a few months!
Posted by Melissa at 11:12 AM No comments: 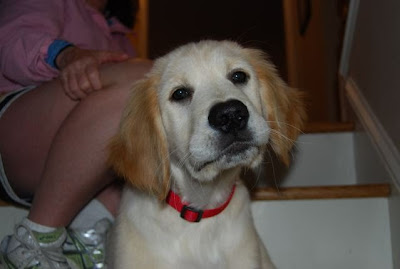 This is me practicing my I'm-so-cute-you-want-to-give-me-a-cookie look.

Posted by Melissa at 4:26 PM No comments:

Scarlett Celebrates One Year With Her New Family 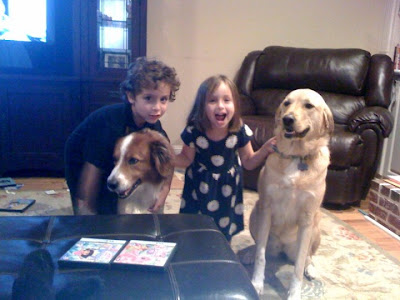 I love family photos, especially since I'm in them. That's my fur-bro Hudson with me, Noah and Maya.

Posted by Melissa at 9:23 AM No comments:

Cooper and his Foster Brother Max 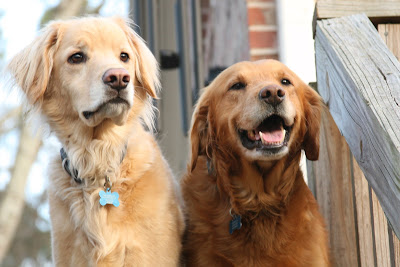 So, this time last year, I was a foster dog too, my red-haired friend. Don't worry! I think you'll get adopted really soon.

Posted by Melissa at 3:58 PM No comments:

Amber Jane At The Office 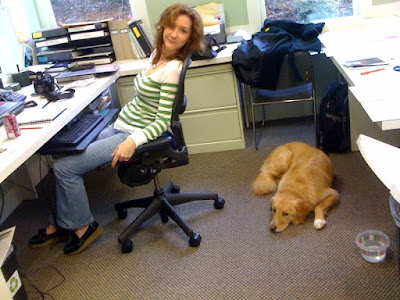 Posted by Melissa at 3:52 PM No comments:

Meet Our February Orphan of the Month, Rufus!

Meet Rufus, a sweet and good-looking 7-year-old male Golden with a Cinderella story!

We found Rufus in a shelter, undernourished, with heartworms and a broken foot. Thanks to generous sponsors who paid for months of medical treatment and sent him to dog whisperer school, today Rufus is handsome, healthy, well behaved and a delightful companion.

He loves people, is gentle with children, likes to play but does not get boisterous. Rufus enjoys a good walk and minds his manners in the house -- no jumping and no accidents. This fall he did go to a nice family who loved him but soon discovered he couldnt get along with their other dog, particularly when it came to sharing toys. Now we know Rufus is a one-family dog who needs to live in a one-dog home!

Rufus has been through a lot and waited a long time for the right family, who will be very lucky to have him. You can meet Rufus (and other adorable orphans) at the Buckhead PetsMart during our Adoption Day from 10 a.m. to 2 p.m.!
Posted by Mandy at 4:15 PM 1 comment: 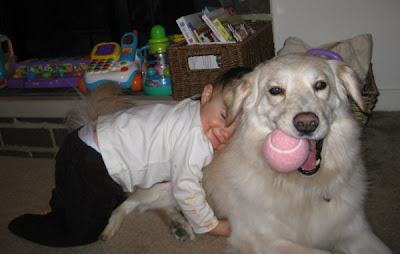 It's good to be loved. So very, very good.

Posted by Melissa at 2:02 PM No comments: